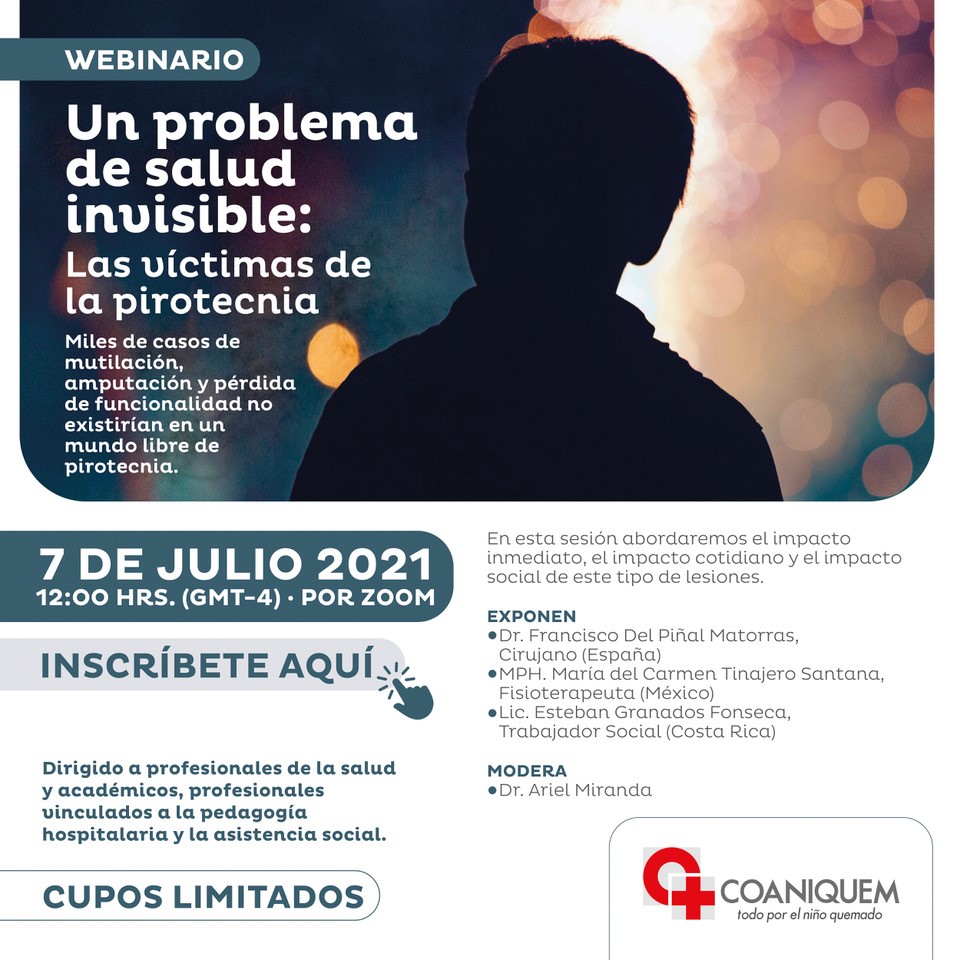 The meeting, promoted by the Chilean organization COANIQUEM, is open to the participation of sociosanitary professionals from Latin America

The Chilean Aid to Burned Children Corporation (Corporación Chilena de Ayuda al Niño Quemado – COANIQUEM) is organizing today a webinar to raise awareness on the medical, day-to-day, and social impacts of accidents associated with the use of pyrotechnic material, under the title ‘An invisible health problem: the victims of pyrotechnics’. The meeting – which will take place at 12 noon, Chile time (6 PM in Spain) – is aimed at health professionals, academics or social workers, among other groups, from all over Latin America. In order to participate, prior registration is required at the following link: https://zoom.us/webinar/register/WN_58_2mZYmQ8qAAdPcfMdT0w (Spanish speaking presenters).

Dr Piñal will present his experience in the approach through reconstructive surgery to mutilations and other serious injuries caused by firecrackers or similar artifacts. In addition to the Spanish surgeon, the panel of speakers is made up of the Mexican therapist María del Carmen Tinajero, head of the Physical Therapy Service of the National Center for Research and Attention of Burns of the National Institute of Rehabilitation Luis Guillermo Ibarra (Servicio de Terapia Física del Centro Nacional de Investigación y Atención de Quemados del Instituto Nacional de Rehabilitación Luis Guillermo Ibarra), and the Costa Rican social worker Esteban Granados, in charge of the Trauma Unit and of support to other services such as Reconstructive Surgery, Orthopedics, Colorectal Surgery and the Burn Unit of the National Children’s Hospital of San José (Hospital Nacional de Niños de San José). After the interventions, the subsequent debate and question time will be moderated by Dr Ariel Miranda (Mexico), former president of the Ibero-Latin American Federation of Burns.

Reconstructive surgery case after fireworks accident: Marius Constantin, 28, lost all five fingers of his right hand due to the explosion of a high-powered firecracker.

COANIQUEM has been treating and rehabilitating in a comprehensive and free way children and young people with burn injuries in Chile and Latin America for more than 40 years. Among the pillars of its work, both prevention and its program of influence on public policies to eradicate the use of fireworks at an international level stand out. This non-profit institution achieved the enactment in Chile in 2000 of the law that prohibits the personal or private use of fireworks and regulates massive fireworks displays. According to their records, “this decreased by 85% the number of children under 15 years injured by fireworks” in the Andean country.

Born in Santander, northern Spain, in 1960, Dr Francisco del Piñal is considered one of the world’s best hand surgeons. His contributions in fields like  microsurgical toe to hand transfer or arthroscopic surgery techniques on wrist fractures are endorsed and used internationally. Among other milestones in his career, it is worth mentioning too the setting of the principles of surgery in the acute catastrophic hand